Consisted of two zamac expanded shields and a cone nut pre-assembled,made of zinc alloy, supplying with 3/16"-1/2" and used for anchoring and fixing the objects in the concrete, masonry or brick substrate to tighten the machine bolt to expand anchor body, plated by white zinc plating.

During installation, fix the zinc alloy single expansion anchor at the open end of the pre drilled hole, insert the end with the expansion cone nut into the base material, and gently tap with a hammer to make the open end of the anchor body flush with the surface of the base material, and move the fixed object to align with the anchor hole. Insert the appropriate type of bolt through the object being tightened and insert the anchor. Turn the bolt head clockwise until the anchorage is fully seated. To avoid bolts not being tightened as this may result in reduced or even non-existent retention values.

Single expansion shield anchor is also called mechanical bolt anchor or concrete single expansion anchor. It has a conical expanded nut with American standard inch internal thread, which is suitable for installation from the light to medium loading place, used for the masonry,concrete or brick and other base materials. Zamac anchors have strong corrosion resistance. A conical expaned nut and a two piece of expansion shields are pre assembled into an expansion anchor. To use galvanized carbon spring steel wire or steel strip to hold the two-piece shields together. When the bolt is inserted into the fixture, the bolt expands and rotates clockwise, resulting in friction.

These single expansion shield anchors must be used with the machine bolts and can be removed if necessary, but the anchor body is disposable. Due to the characteristics of the zinc alloy material used, the product has strong corrosion resistance and rust proof function.

Single expansion anchors are used in base structures with mechanical screws or bolts that are exposed to vibration or lateral pressure. The conical expansion nut will climb up along the bolt when tightening, so as to expand the shield body and produce expansion function. The installed bolts can be removed and replaced without affecting the bearing capacity of the anchorage system. 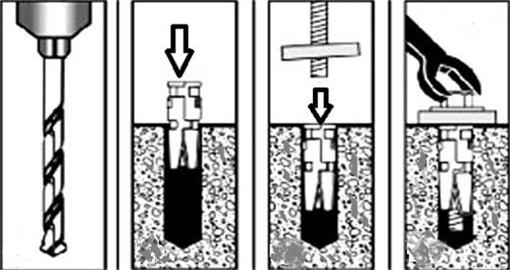 *The special style and size are available

Send Us Your Inquiry Now!